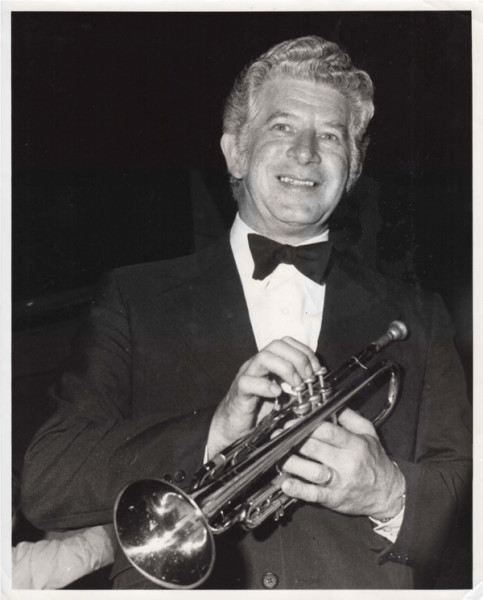 Johnny Cowell is regarded as one of Canada’s most outstanding trumpet soloists. He has been the featured soloist with many of Canada’s symphony orchestras and appeared as trumpet soloist with the Toronto Symphony regularly over many years. John has received outstanding reviews when he has appeared as soloist with America’s “King of Pops” Erich Kunzel, who has referred to John as “a rare combination of Wynton Marsalis, Maurice Andre and Gerard Schwarz with a bit of Harry James thrown in for good measure.” John played his first trumpet solo at the age of six and at fifteen became the youngest member and soloist of the famous Toronto Symphony Band which presented a weekly series of broadcasts over CBC Radio. At age sixteen, he played his first engagement with the Toronto Symphony. During the war years he was a soloist with the Royal Canadian Navy Band as well as first trumpet with the Victoria Symphony Orchestra. He became interested in writing music at an early age and following his discharge from the Navy Band, was awarded a scholarship in composition from the Royal Conservatory. One of Canada’s best known commercial composers, John has had more than 100 of his songs recorded. Two of these have become international standards placing #1 on the hit parade: Walk Hand in Hand in 1956 and Our Winter Love in 1963. His songs have been recorded by an impressive list of entertainers including Dame Vera Lynn, Harry Secombe, Andy Williams, Chet Atkins, Lawrence Welk, Tony Martin, Anita Bryant, The Lettermen, Gerry & The Pacemakers, 101 Strings, Nashville Strings as well as Bill Purcell and others too numerous to mention. Canadian entertainers such as Moe Koffman, Teddy Roderman, Laurie Bower Singers and many others have also recorded Johnny’s pieces. He has written special songs for Floyd Cramer and trumpeter Al Hirt. His best known was Al Hirt’s recordings of Strawberry Jam. In 1967 His Girl, written by Johnny, brought international prominence to the famous rock group “The Guess Who”, and was also recorded by Al Hirt. One of his songs Stroll Along with the Blues recorded by Red Heath and David Rose found its way into the movie Two-Way Stretch featuring Peter Sellers and Ted Heath’s recording was used in the scene. One of the highlights of Johnny’s solo playing career was when he was called at the last minute to substitute for Doc Severinsen, who had to cancel a solo engagement with the Hamilton Philharmonic. The Mayor and the people of Tillsonburg, Johnny’s birthplace, awarded John a special plaque and named him Tillsonburg’s Favourite Son during a three-day tribute and celebration.

John has composed a number of Symphonic Pops compositions that have been performed regularly by two of American’s outstanding “Pops” conductors, Erich Kunzel and Newton Wayland. In 1991, on July 18, the Toronto Symphony did something it had never done before in its 70 year history. It presented two special concerts honouring one of its members. Johnny was featured as trumpet soloist, composer and arranger, marking his retirement from the orchestra after being associated with the Toronto Symphony for 50 years. His recordings – Carnival of Venice – Great Show Pieces for Trumpet and Orchestra and The Art of Johnny Cowell – Virtuoso Trumpet Favourites have been received international exposure and feature Johnny as trumpet soloist, composer and arranger along with members of The Toronto Symphony. For 16 years he was featured soloist with the Pro Arte Orchestra of Canada. When Johnny retired from the Toronto Symphony in 1991 Maestro Kerry Stratton invited him to become the Principal Trumpet with the Toronto Philharmonia, a post which he held for 10 years. Also for 8 years following his retirement from the Toronto Symphony, he was one of the featured soloists with the Hannaford Street Silver Band which is considered to be one of the finest Brass Bands in the world. One of the highlights of his career was when he was commissioned to compose a special fanfare for Governor General Jeanne Sauve in March 1984. He was also commissioned to compose a fanfare for Her Majesty The Queen at the opening of the Metro Convention Centre in October, 1984. On September 25, 1997 the Mayor of the city of Scarborough presented Johnny with the Civic Award of Merit of his international success in the world of music.